Last year I told you about how I needed a script that would detect all versions of an application on a computer and uninstall each version one at a time. Long story short, I couldn’t find one, so I ended up putting one together! Since the original post was published, I received a number of questions about how to force a delta or a full SCCM hardware inventory after the applications were uninstalled. Eventually I decided to update my original script and the post about using PowerShell to uninstall applications.

The new script includes a delta inventory and there is now an option to force a full SCCM hardware inventory. Previously, if the uninstalled application was an EXE file (and not a MSI file) the PowerShell script would fail because the hard code would only allow MSI files to uninstall. I corrected this problem, so now both EXE and MSI files are uninstalled. 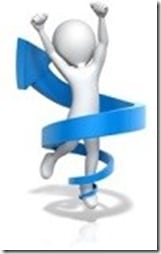 Before getting to that, though, I should tell you that my friend Jason Sandys already had a VBScript to do exactly what I was looking for last year. There is a long inside joke between us about VBScript vs PowerShell, but I won’t bore you with it here. When I was originally looking for scripts, it had to be PowerShell or nothing. At the time the reason was simple. I needed to learn more about PowerShell, so I never looked for a VBScript and never saw Jason’s post. The funny part is that Jason eventually told me about his script and showed me one very cool feature. You can force a hardware inventory cycle to occur afterwards! You must check out Jason’s script on his blog site.

I can hear some of you saying, “Which script is better?” The answer depends, in my opinion, on your understanding of VBScript and PowerShell. Outside of that, pick the one you like the best and use it!

I was product testing Monitor Information Reporting (MIR) which is now a part of Enhansoft Reporting. This testing involved deploying several updates to my lab’s clients. My lab’s a mix of both x86 and x64 operating systems (OS). After deploying all of these versions of MIR, I was left looking for a solution that would enable me to quickly clean-up the client installs. Ultimately I only wanted the final version of MIR installed on each client. 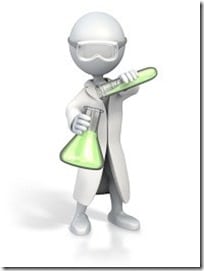 Unfortunately there was no way of knowing which versions of MIR were deployed to which test computers. There was also the possibility that several test computers could have more than one version of MIR installed. I needed an easy way to automatically detect all versions of MIR on a computer and uninstall each one, one at a time, without having to manually uninstall it on each computer. Since this time, I am happy to say, the setup for MIR was updated, so only one version of it can be installed on a computer at a time.

Back to last year’s problem. You would think that I could find a PowerShell solution. Have you ever deployed Adobe Reader? Then you would know that there can be several different versions of Adobe Reader listed within Add/Remove Program (ARP) on a computer. Why wouldn’t there be an easy way to delete the older versions?

At a high-level, this is what my updated PowerShell script does:
-Detects if the script is running in x84, x64 or WoW32 mode.
-Reads both x86 and x64 uninstall registry keys.
-Locates all versions of an application.
-Loops through the list of ARP entries and collects the:
-MSI name/GUID/Uninstall string.
-Detects if the application is an EXE or MSI and uninstalls the application accordingly.
-Logs each step to a log file.
-Runs a delta hardware inventory or, if the flag is set, a full SCCM hardware inventory.

How to Deploy the Uninstall Application Script with SCCM

First, start by editing the script. Replace the application’s name with the one you want to uninstall. In the download version it is currently set to: Monitor*Information*Reporting* Keep in mind that the * is a wild card used to search ARP entries.

Second, decide if you want to force a full SCCM hardware inventory, so set the flag accordingly.

Third, create a package and program for your command line. It should look similar to the following:
powershell.exe -ExecutionPolicy bypass -file Uninstallv10.ps1

Fourth, and finally, deploy the package and program as you would any other program.

You can see in the screenshot below that I had several copies of MIR installed on this test computer last year. 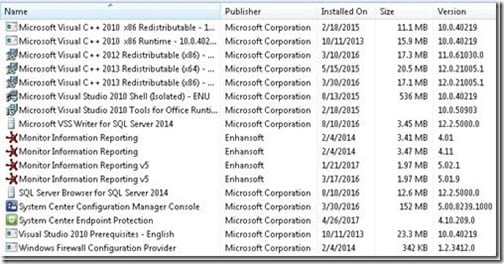 I setup my program to silently deploy in the background. Nothing to see from an end-user’s perspective!

If you would like to verify that the PowerShell script is running, look at the Task Manager. You’ll have to be quick! The script only takes a few seconds to a few minutes to run depending on the number of ARP it has to remove. As an aside, you can also see that the script ran within the Execmgr.log on your test computer. 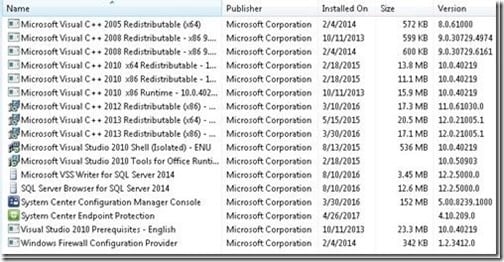 You can see from the screenshot above that after a few minutes all of the Monitor Information Reporting ARP entries were removed.

Keep in mind that the hardware inventory cycle (delta or full) will start soon after all of the applications are uninstalled. It only takes a few seconds to run (~60 seconds).

In some cases, you might want to reboot the computers after the hardware inventory is submitted to SCCM. In my case, I added a Sleep command to the PowerShell script for 75-seconds before rebooting. If your hardware inventory takes longer, simply adjust the time accordingly.

Here are the commands I used:
Start-sleep – seconds 75
restart-computer -force

If you have any questions about using PowerShell to uninstall applications, please contact me @GarthMJ.

See how Right Click Tools are changing the way systems are managed.

Immediately boost productivity with our limited, free to use, Community Edition.

How to Find the Replacement Cost for a Collection of Computers

How to Add a Custom Background for Your Meetings

Use Endpoint Insights to Budget with Confidence, Gain Asset Insights and Stay Ahead of Issues

Introducing Endpoint Insights: Taking Enhansoft to the Next Level

How to Enable WMI Logging in Windows

How to Set the Default Report Parameters for a MECM Report

How to Get the Most Accurate Results from ConfigMgr

How to Create a Prompted WQL Query

Change the Maximum File Size of a MIF

How to Create a Collection Prompt Query

How to Determine the Microsoft Azure Tenant ID

How to Use SCCM to Inventory a Tesla

How to Confirm That Hardware Inventory Is Working

The Many Different Acronyms of Configuration Manager

What is the Most Cost Effective Computer Replacement Plan?

How to Get a PFX Certificate for CMG

How to Query a Tesla with PowerShell

How to Download a Software Update Outside of the SCCM Console

Run Scripts is the Best Feature in SCCM

Where to Find User Name Data Within Configuration Manager – Part 2

Where to Find User Name Data Within Configuration Manager – Part 1

Turning Three Reports Into One Report

User Installed Software and Why You Should Care

How to Install SQL Server 2019

How to Delete SSRS Reports and Folders

How to Create a Collection for Workstations

How Old Are Our Computers?

Why Is It Important to Use Supported SQL Server Views with SCCM Reporting?

How to Send a Smile to the SCCM Product Team

What Are the Supported SQL Server Views to Use with SCCM Reporting?

How to Test Microsoft Apps After Moving DNS Servers

How to Install a SCCM Reporting Services Point

How to Enable Intune on a Windows 10 Computer

How to Remove Intune from a Windows 10 Computer

How to Backup SCCM Reports

How to Add Alternating Row Colors to SCCM Reports

What Are the Best Report Styles for SCCM?

How to Report a Bug or an Issue in Microsoft Intune

Did You Know? Warranty Information Reporting 2018

How to Leverage the Interactive Sorting Feature in SCCM Reports

Adding a Prompt Value to the Title of a SCCM Report

How Can I Add a Title to a SCCM Report?

How Can I Install Report Builder?

How to Start Editing SCCM Reports with Report Builder

How Big Should My Dashboard Be?

How to Create an Anti-Malware Policy for Endpoint Protection

Configuration Baseline Remediation – How to Create the Baseline

How to Grant Permission to a Single SCCM SSRS Report

Free Getting Started with Power BI and SCCM eBook

How to Customize SCCM Data in the ServiceNow CMDB

How to Import Custom SCCM Data into ServiceNow

How to Integrate SCCM Data with ServiceNow

How to Setup a ServiceNow MID Server for Use with SCCM

How to Request a ServiceNow Developer Instance to Integrate with SCCM

How to Collect Free Disk Space Data in SCCM

How to Increase the Size of SCCM Site Server Log Files

Getting Started with Power BI Desktop and SCCM

How to Setup, Configure and Use SCCM’s Asset Intelligence

How Do You Install SQL Server Data Tools?

What is Enhansoft Reporting for SCCM?

Did You Know: Warranty Information Reporting

What Can I Do to Not Overload My SCCM Environment?

Cloud Reporting: How to Setup a Linked Server

Determine Who Is within the Domain Admins Group Using ConfigMgr

How to Perform a Basic Software Audit

How to Insert a Report Description into a ConfigMgr Report

How to Query Asset Intelligence for Top Console User Details

Reducing the Effects of Endpoint Protection on Hyper-V Server Performance

How to Determine What Software Updates Are Required within Configuration Manager

Tips for Installing Windows 10 on a Zotac MI522 Nano

How Do You Determine the Length of a Software Inventory Scan Cycle?

How to Install Windows 10 via a USB Drive

How to Create a SQL Server Computer Account Login

How Do I Hide the Toolbar When Running My Reports?

How Do I Install PowerShell Modules?

How to Test Your MP to Confirm If It Is Healthy

How to Enable the ConfigMgr Rebuild Indexes Site Maintenance Task

How to Backup Your ConfigMgr Database Using SQL Server

How to Set the Page Size for a ConfigMgr Report

How Do You Automatically Backup ConfigMgr Reports Using AfterBackup.bat?

How Do You Backup All of Your Custom ConfigMgr Reports?

How Do You Backup a Single SCCM Report?

How Do You Change a ConfigMgr Report When You Don’t Have the RDL?

How to Perform a Software Update Audit

How to Export SSRS Report Details

How Do You Configure and Import the SSRS Brand Package?

Determine Who Installed the ConfigMgr Client from Event Viewer

Who Pushed the ConfigMgr Client?

How to Perform a Full Sync of AD to Azure AD

A Quick Test for Downloading Files from Your DP

The DefaultValue Expression for the Report Parameter ‘UserTokenSIDs’ Contains an Error

How Many Software Updates Are Within My WSUS Database?

How to Use Installation Prerequisite Check

Using a PowerShell Script with AfterBackup.bat in Configuration Manager 2012 and 2007

Turning Off the Windows Firewall Warning Message in ConfigMgr 2012

How to Manually Create a System Management Container for Configuration Manager

How to Set AD Security Rights for the System Management Container

A Simple Way to Extend the AD Schema for SCCM

How to Create a Visio Diagram of Your ConfigMgr Environment

How Queries Are Processed

How to Grant Permission to a Single SCCM 2012 SSRS Report

What IOPS Do I Need for Configuration Manager?

How to Determine the Locale of SSRS Reports in SCCM 2012

How to Force a Full SCCM Hardware Inventory

Create a Collection with Non-Compliant Servers

How to Create a Configuration Baseline

Create a Configuration Item to Ensure that the No_SMS_On_Drive.SMS File is on All Site Servers